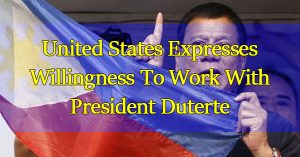 The United States has expressed clear intentions of their desire to work with controversial figure Rodrigo Duterte, the newly-elected president of the Republic of the Philippines. Presumtive Philippine President Duterte, a former mayor of over 20 years in Davao City, has emerged victorious from the presidential 5-way race against rivals who held national offices such […]