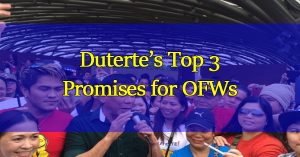 As the newly-elected President of the Republic of the Philippines, all eyes are set on Rodrigo Roa Duterte, former Mayor of Davao City and the sole presidential candidate from Mindanao. Duterte won by a huge margin over his opponents, winning as the 16th president of the country. During the last presidential debate held on April […]