department of labor and employment 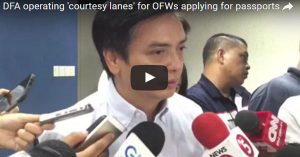 Overseas Filipino Workers (OFWs) will soon be able to enjoy the services offered by a dedicated passport application center, according to the Department of Foreign Affairs (DFA). Charles Jose, spokesman of Foreign Affairs, reported that the new OFW passport center will be located at the DFA’s current consular office at Robinson’s Galleria in Ortigas. This […] 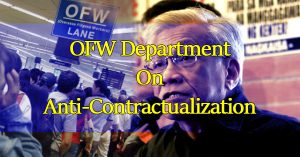 Former Justice Secretary and incoming Labor and Employment Secretary Silvestre Bello III has said that he will look into the feasibility of creating a new department for Overseas Filipino Workers (OFWs) as mandated by president-elect Rodrigo Roa Duterte. Once he assumes the new position, Bello said he will visit all countries where OFWs are employed. […]