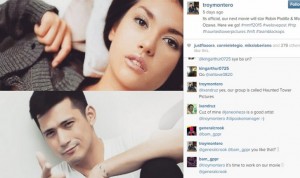 Former actor and now producer Troy Montero has posted on his Instagram account about his plan to produce a movie starring actor Robin Padilla and Japanese sexy actress Maria Ozawa. Montero plans for this project to join in 2015 Metro Manila Film Festival and the movie theme project is said to be a horror flick. […]