You are here: Home / Uncategorized / This Beautiful Badjao Girl Is The Latest Viral Sensation

Just this year, Jeyrick Sigmaton (better known to netizens across the country as “Carrot Man”) became a viral sensation when several photos of him got thousands of likes, shares, and comments on Facebook. Everyone was simply captivated by the handsome young farmer from the Mountain Province who was, as shown in one of the candid shots, carrying a huge basket of carrots.

The instant popularity eventually landed him TV appearances and, eventually, a product endorsement deal with Boardwalk PH, a local brand of apparel and accessories.

This time, it looks like another native is about to shine.

A young Badjao girl has been generating considerable online buzz as her candid photos, similar to Jeyrick’s, have been heavily shared on Facebook. 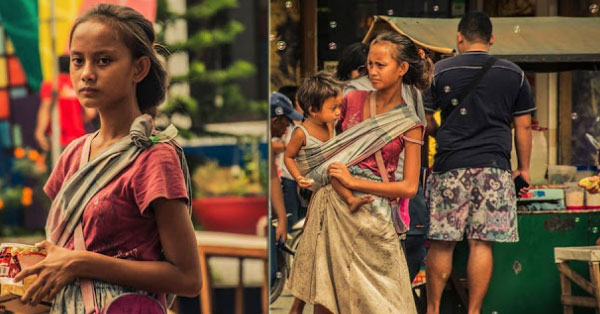 According to photographer Topher Quinto Butgos, he spotted “Badjao Girl” while he was strolling at the Pahiyas Festival, an annual event in Lucban Quezon. The poor girl was asking for alms from the crowd but, being a photographer, what he noticed wasn’t his shabby appearance but her natural beauty. So he snapped a few photos.

Topher later shared the images on Facebook group Nikon Philippines and things started to spiral from there. On his account alone, the photos reached over 40,000 shares.

Netizens agreed that the teen is indeed a head-turner with looks that could probably land her to acting or modeling gigs. Some commenters even noted that the unnamed girl has a striking resemblance to Ylona Garcia, a former “housemate” of reality show Pinoy Big Brother while others say she looks a bit like a young Pia Alonzo-Wurtzbach (current Miss Universe).

There are also those who expressed concern for her well-being, going as far as suggesting that she be placed in the custody of presumptive president Rodrigo Duterte, who has a soft spot for natives, or other concerned agencies.

Will Badjao Girl be the next TV star or product endorser? We definitely can’t wait to find out.