You are here: Home / News / Epic Fail or Genius Solution? Surgeon Tucks This Man’s Severed Hand Inside His Belly

Saving the man’s severed hand was the major concern of his doctors, so they decided to tuck in the entire left hand of this Brazilian man.

Carlos Mariotti, 42 years old, suffered an accident while working as a production operator. The incident almost ripped all the skin of his hand. But luckily, instead of removing his severed hand, surgeons performed a rare operation to save his hand. But then, it was awkwardly tucked into his soft tissue pouch in six weeks’ time. His doctors couldn’t comprehend where to put his whole hand, but to his abdomen.

The doctors decided to continue with this procedure because without it, his hands will suffer infection since his bones and tendons were exposed. 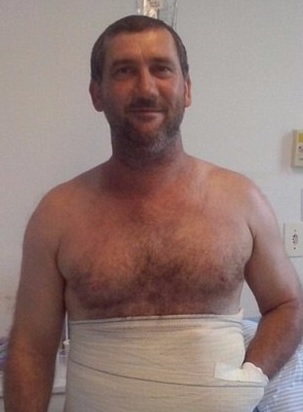 According to Mr. Mariotti, he was such a lucky man. But after the operation, he was terrified to know that his left hand was actually inside his abdomen. The doctors also advised him to move his hands inside his extremity to avoid becoming stiff. To his, it is really creepy to wiggle his hand inside his body and seeing it slightly protruding inside his tummy.

But according to him, nothing is more terrifying than seeing his hand being chewed by the machine and he couldn’t do anything about it. So he just decided to wrench his hand out of the deadly machine. His co-workers tried to save his hand through wrapping it in bandage.

Mr. Mariotti’s hand should remain in his abdomen for 42 days. By that time, tendons and new tissues will start to develop, making him more capable to receive replanted skin graft.

Actually, this is not the first time that doctor’s decided to implant parts of the body in odd places. In 2008, Sherrie Walter’s severed ear was placed in her arm. In 2009, beauty queen Jamie Hilton’s part of the skull was placed in her abdomen after suffering head injury. In 2010, a child’s severed hand was placed in her leg after a tractor accident. All of which recovered their severed body parts after several months.