You are here: Home / News / Japan To Fund $2.4B For Philippines Railway Project In Manila

Japan recently made an announcement that they will be funding a $2.4 billion new railway project to help ease the massive traffic in Manila. Representatives of the country said that the elevated commuter line would run for 38 kilometers and it is aimed at connecting Manila to the province of Bulacan.

In an interview with Manila reporters, Masato Ohtaka, deputy press secretary for Japan’s foreign ministry, said: “This is one of the biggest projects Japan has ever embarked upon using the yen loan.”
Ohtaka also added:
“Railways are one of our fortes … We sympathise with the Filipinos that this is a project that needs to be done very, very quickly.” 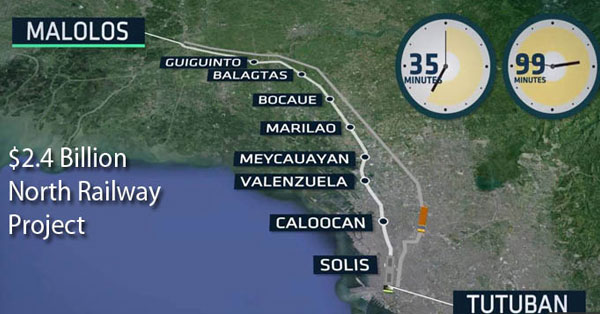 Moreover, Ohtaka likewise pointed out that Japan is also open about building a railway in Mindanao – a project that China has previously offered to fund, according to Philippine President Rodrigo Duterte.
Although former foes during World War II, the Philippines has been aiming to strengthen its bonds with Japan. Currently, the Philippines is facing a territory dispute with China.

Japanese Foreign Minister Fumio Kishida recently paid a visit with Pres. Duterte in his office in the City of Davao and the railway project was one of the topics discussed. Earlier, Pres. Duterte has said that decongesting the worsening traffic in Manila will be among the immediate priorities of his administration.
Presently, railway commuters in Manila have to endure long lines and ride overcrowded trains just to travel around. Pres. Duterte himself has declined engagement invitations in Manila because he wanted to avoid getting stuck in gridlocks.

The Philippine transportation department is expected to receive the Japanese loan and will be payable for more than 40 years. Ohtaka, however, did not give a timeline for the said project.
Additionally, Japan is donating coast guard vessels and leasing aircraft to help strengthen the maritime and military capabilities of the Philippines.