You are here: Home / News / Pinay Midwife Fires Back After Being Bashed For Working As A Maid OFW In Taiwan

Overseas Filipino Worker (OFW) Iries Jane Benlot has decided to speak out after being a target of online bashing.

According to a post on her Facebook wall, people have been attacking her for choosing to work as a household worker in Taiwan instead of a midwife in the Philippines. Friends and other Filipinos have been labeling her as unintelligent for becoming a maid instead of pursuing her former profession.

To her defense, she said being a household help is a decent job and she has nothing to be ashamed of. Unlike others, she doesn’t steal from anyone and that she can proudly claim that working abroad has helped her achieve self-reliance. She said she can buy anything she wants with her own money instead of bugging her parents or anyone else. The most rewarding thing for her, of course, is that she is able to support her family back home.

So while the job may not be as prestigious, she is absolutely proud to be working as an OFW in Taiwan. She has learned a lot from the entire experience and she has no regrets about taking the path.

Her Facebook post, accompanied with a picture that shows her in midwife uniform and her current appearance as an OFW, generated a lot of attention and support online. Since uploading it last November 13, 2015, the status has earned 5,359 shares, 50,641 likes, and 1,560 comments.

Clearly, more people agree with her sentiments than with the bashers’ criticisms.

Iries, who goes by the Facebook handle Sweetybabes Iriesh, has been in the country for 10 years now and has managed to stay with the same employer since she began working. We’ll take that as a proof of excellent performance.

Kudos to you, Iries, for being proud of what you do – and kudos to all OFW in Taiwan especially those household workers out there! 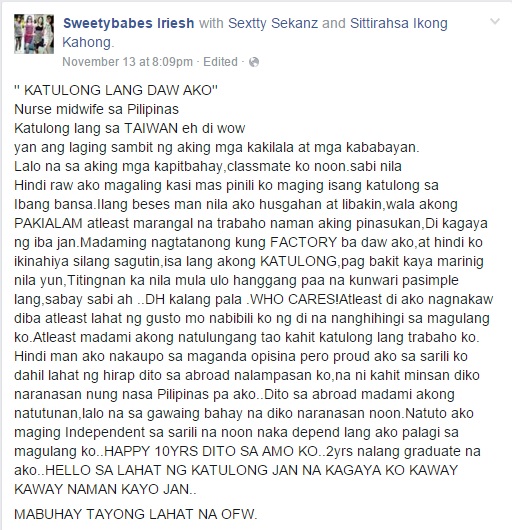 screenshot from her FB timeline