For OFWs in Saudi Arabia, here are some useful information that you can use for your well-being and protection. The Ministry of Labor has announced new regulations that fines will be implemented should employers violate your rights.

For example, your employer will be fined SR2,000 if he or she keeps your passport. On top of that, a fine of SR5,000 will have to be paid if your boss does not give you a copy of the work contract.

Additionally, an employer will be fined SR1,500 for forcing a worker to do a job different from what is specified in the contract or if a worker is asked to pay expenses that the employer should shoulder.

Along with that, companies will be fined for delayed salaries, forcing employees to work overtime without additional pay, or for requiring them to work during holidays and weekends. Also, violations cover employers that force workers to work under extreme weather conditions without any proper precautions.

Employers will be fined as well if they prevent a worker from acquiring a needed recommendation letter.

A fine of up to SR25,000 will be charged to a company that wrongfully claims employment of Saudis or if they hire expatriates in work positions that are only meant for Saudis. As if that’s not enough, the company will also be required to close for 5 days.

In relation with that, hiring an expatriate without license could cost an employer a fine of SR45,000 while those who sell visas to expatriates can be fined SR50,000.

On the other hand, companies that hire men on jobs intended for women will be ask to pay SR10,000 for every male worker along with the requirement to close the company for a day.

Fines likewise apply for those who will employ women in mixed areas and then forcing them to work during banned hours. For such cases, the fine could range from SR5,000 to SR10,000.

Companies in violation of required safety and health standards or are hiring minors will be fined SR25,000. A fine of SR10,000 to SR20,000 will be charged for unlicensed or unregistered recruitment offices.

If that’s not enough to scare potential violators, the Ministry of Labor has also stated that fines will be doubled if they commit the same violation twice.

Added to these, there is also SR 3,000 fine waiting if ever the Saudi employers delay their worker’s salary.

See the fines of every violation 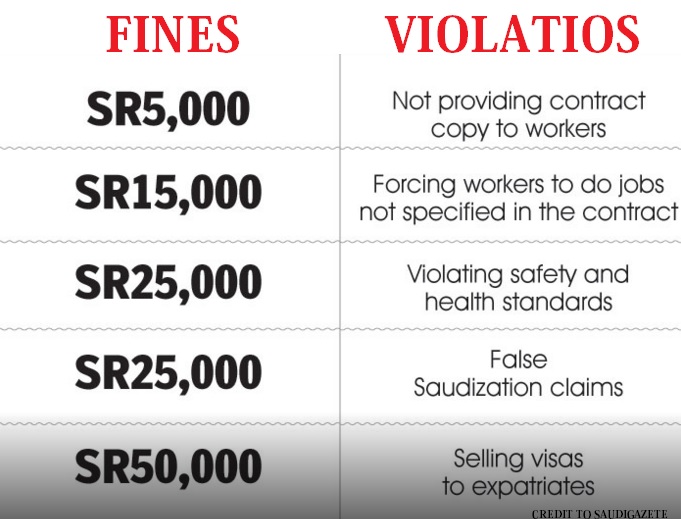