Last week there a lot if scandal whirling on social media, on of it is what they called Bagito Scandal or Stairways to Heaven wherein the allegedly making scandalous act on the stairs. 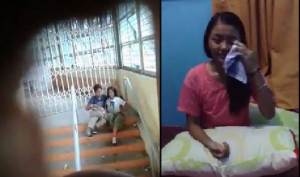 Meanwhile rumor spreads out that the boy on the said Bagito Scandal commits suicide because he cannot take anymore what people says about him. But the suicide was said to be an Hoax meaning that is not true that the boy end his life.

Watch the video,. the girl asking for help and claiming that she’s not on the Bagito Scandal video.