You are here: Home / vide / Watch | San Beda Girl Student Serenade by His Man Along Mendiola
This video shows how young man deeply inlove to her girlfriend as what you’ve seen if you watched the video, a young man student from San Beda sang “Kahit Maputi na Ang Buhok Ko” while holding  bouquet of flowers together with blind man guitarist if I’m not mistaken. Also at the back of them a group of students holding paper board with sign of Anniversary. This scene scenario happened along Mendiola intersections.

While the boy singing and onlookers are watching in both end, finally his girlfriend shows and came out going to him. Then the boy said to the girl: 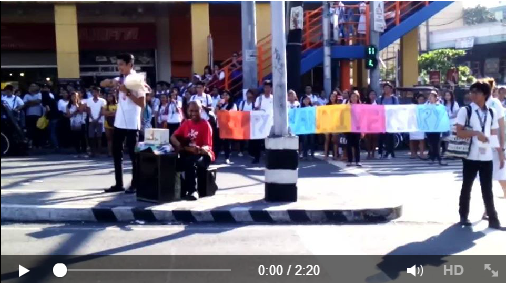 This video was originally posted by Jonah Anjela Rivero Flores on his Facebook account. This video becomes viral with 7000 likes 3000 plus shares and more 700 plus comments.